Adaptation in the face of climate change is currently a major challenge, not only in the EU, but all around the world. Climate change has two distinct characters: the slower trends in climatic variables such as sea water temperatur, and the extreme weather phenomena, such as heavy precipitation. The fundamental driver for regional adaptation are regional climate scenarios. Crucial for local societies is the resilience of critical infrastructures, such as Energy and Transport, against the envisaged climate scenarios. Without proper functioning of such infrastructures, many service sectors, such as Tourism, will be negatively affected. ToPDAd developes state-of-the-art socioeconomic methods [&] tools for an integrated assessment supporting regional adaptation decision-making.
Based on these, conjectures with respect to EU level policies for the considered sectors Energy, Transport, as well as, Tourism are made. Two time frames are specified; 2010-2050 and 2050-2100 for mid-term and long-term strategy formulations. Regional strategies and EU-level policies need to be consistent across the time frames in order to avoid maladaptation. ToPDAd will also develop the European Climate Adap-tation Platform (DCLIMATE-ADAPT). The CLIMATE-ADAPT is a key for continuous learning, and a repository of data and tools support-ing adaptation decision-making. Within the ToPDAd project an updated and upgraded version of the GINFORS model will be applied in the context of the upcoming climate adaptation debate. In work package 3 the environmental and economic impacts of sector resp. regional adaptation will be assessed with regard to different scenarios. 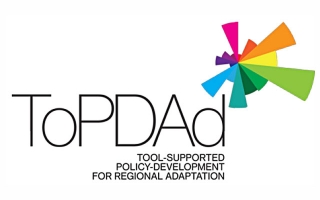 5-day training in Uganda on modeling and evaluation of climate change mitigation measures with the model e3.ug

During the training from September 5-10, 2022, in Entebbe (Uganda) with representatives from politics, science, statistics and NGOs, first study results of the DIAPOL-CE…

Our figure of the month 09/2022: Continuous growth in employment in socially necessary service occupations is not enough

Socially necessary services (SRS) include sectors or branches of the economy that are indispensable for the functioning of our society. The need as well as the provision of these services…