Both the German government's heat pump offensive and the sharp rise in energy prices due to Russia's war against Ukraine are currently boosting demand for heat pumps and solar thermal systems enormously. As a result, plumbing and heating specialists are also moving into the spotlight, as they are indispensable for the installation and maintenance of these devices.

However, the Federal Statistical Office currently reports a decline in the number of people employed in sanitary and heating construction occupations (plant mechanic for sanitary, heating and air conditioning technology or furnace and air heating installer) over the last 10 years: While just under 303.000 workers were employed in one of the relevant occupations in 2012, the figure was around 275.000 in 2021, representing a decline of 9.4 %. In addition, the Federal Office's statisticians found that more than one in five of those employed in the plumbing and heating trades could retire from the workforce soon for reasons of age. In 2021, 22,4 % of the workforce was already between 55 and 64 years old.

However, the number of apprentices is bucking the trend:

An evaluation of the apprenticeship statistics of the German Confederation of Skilled Crafts (ZDH) as part of our figure of the month showed that the number of apprentices for the occupation of plant mechanic for sanitary, heating, and air-conditioning technology rose by 23,2 % nationwide in the period from 2011 to 2021. Whereas in 2011 around 31.600 young people nationwide were still pursuing an apprenticeship in this occupation, by 2021 the figure had already risen to over 39.000. This development not only runs counter to the declining number of people employed in this occupational group, but also bucks the trend of falling apprenticeship numbers in the skilled trades in general. Whereas in 2011 around 417.000 young people were still pursuing an apprenticeship in a skilled trade occupation, by 2021 this figure had fallen to just under 360.000. This corresponds to a decline of 13,7 % over the period under review.

If we look at the development of the number of apprentices in the occupation of plant mechanic for sanitary, heating, and air-conditioning technology, differentiated by federal state, there are clear differences in the growth rates in the period under consideration from 2011 to 2021: As can be seen in our chart, the number of apprentices in the occupation under consideration in Saxony recorded the highest percentage growth of 87 %. In Saarland, on the other hand, there was a downward trend. Here, the number of apprentices decreased by 10,1 %. Overall, it is noticeable that the largest percentage increases are in the eastern states. In addition to Saxony, Mecklenburg-Western Pomerania (+58,6 %), Brandenburg (+53,5 %) and Thuringia (+35 %) also recorded high growth rates. Growth rates in North Rhine-Westphalia (+23 %) and Bavaria (+24,9 %) are roughly in line with the national trend, while apprenticeships in Rhineland-Palatinate (+4,7 %) and Schleswig-Holstein (+4,5 %) are developing well below average. 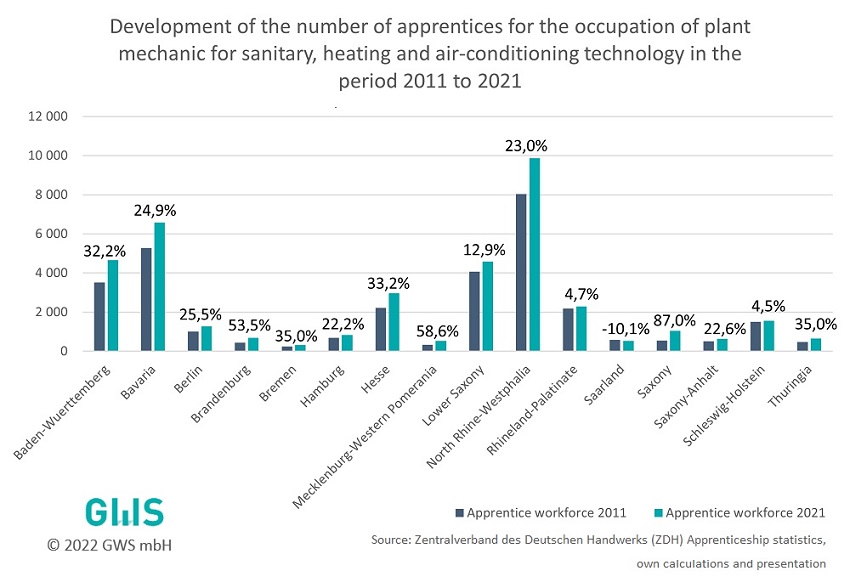 The high percentage growth rates can be explained on the one hand by the relatively low number of apprentices in the federal states with very high growth rates at the beginning of the period under consideration in 2011. In Mecklenburg-Western Pomerania, for example, an absolute increase of 194 apprentices between 2011 and 2021 is sufficient for a growth rate of over 58 %. On the other hand, the different developments in the federal states in the age group relevant for an apprenticeship (15-21 years) in the population could explain the different levels of growth. For example, while in Saarland the group of 15–21-year-olds declined by 18,5 % between 2011 and 2021, the number of young people in this age group grew by 20,2 % in Saxony. Similar positive developments in this age group can also be seen in Mecklenburg-Western Pomerania (+11,8 %), Brandenburg (+16,6 %) and Thuringia (+10,5 %) over the period under consideration. While, for example, Rhineland-Palatinate (-14 %) and Schleswig-Holstein (-7,9 %) recorded a decline in the number of 15 to 21-year-olds in the period under review.