The National Hydrogen Strategy formulates the goal of a production capacity of 10 GW of green hydrogen by 2030[1]. Although the discussion about the production of green hydrogen often focuses on the sufficient availability of electricity from renewable energies, the production of hydrogen by means of water electrolysis also requires water in addition to electricity. In concrete terms, 9 litres of water are needed to produce 1 kg of hydrogen. This must be so-called "demineralised ultrapure water". Due to the treatment of raw water that is thus necessary, the actual demand is probably even higher – for example, the demand for saline seawater would rise to 22.5 litres per kg of hydrogen[2].

Assuming an electrolyser efficiency of 70 % and 4000 annual full load hours, a production capacity of 10 GW would mean a water demand of approx. 7.6 million m3 ; or 19 million m3 if only seawater were used. 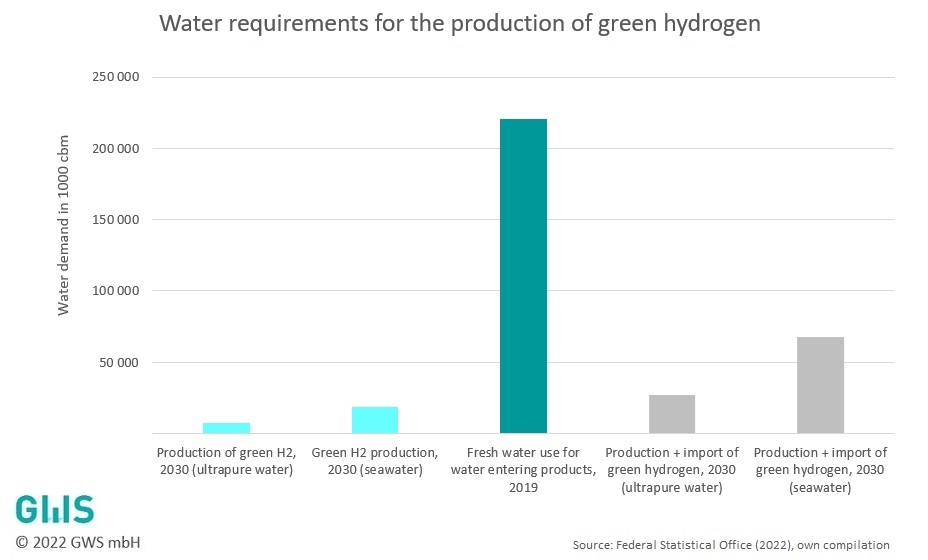 The graph shows these two possible demands in 2030 compared with the fresh water use for water entering products in 2019, which according to the Federal Statistical Office was approx. 220.5 million m3. [3] However, it only accounts for 1.4% or 15.3 billion m3 of the total water use in the economy – excluding public water supply operations. Taking these figures into account, the chart makes it clear that water shortages are not to be expected as a result of the ramp-up of a "hydrogen economy". Especially since some of the water currently used (e.g. by coal-fired power plants) could be substituted by hydrogen.

In general, however, it is assumed that with a production capacity of 10 GW only about 30 % of the total demand for green hydrogen in Germany can be met and thus has to be imported. Accordingly, the graph also shows the water requirements of the total amount of green hydrogen forecast to be needed in 2030 – around 27 million m3 and 67.5 million m3 respectively, depending on the water quality. In contrast to Germany, water shortages may occur in possible export countries, such as the already dry countries of the MENA region, due to the production of large quantities of hydrogen. Accordingly, these and other possible negative externalities should be considered when importing hydrogen. This is addressed, among others, in a publication of the project "Labour demand and labour supply along the value chain 'hydrogen'".  Further information on the project can be found here.

Since 1991, water extraction has been almost halved through the use of water-saving technologies and processes and amounts to approximately 28 billion cubic meters per year. The energy sector,…

Our figure of the month 11/2022: Nine times higher transport performance of passengers in coach transport

The boom in long-distance coach transport, triggered by the liberalisation of the market in 2013, came…

The Environmental Footprint of Food

Feeding humanity puts enormous environmental pressure on our planet. Until now, however, there has been no comprehensive examination of the environmental footprint — the locations affected by…

The transition to a green economy is changing the demand and supply of skills and jobs. Various challenges and methodologies exist to identify these skill needs. The OECD is currently…

Our figure of the month 10/2022: No water shortages expected from hydrogen production in Germany

GWS at the EcoMod 2022 in Ljubljana

The annual conference of the EcoMod Network (International Conference on Economic Modeling and Data Science) took place this year in Ljubljana (Slovenia) from September 14 – 16. GWS…

5-day training in Uganda on modeling and evaluation of climate change mitigation measures with the model e3.ug

During the training from September 5-10, 2022, in Entebbe (Uganda) with representatives from politics, science, statistics and NGOs, first study results of the DIAPOL-CE…