Wage increases cannot keep up with the increase of property prices, which means that affordability continues to decline. This is measured by the price-income ratio (PIR) and shows that in 2021, an average wage earner in Germany has to pay more than the tenfold of his gross annual wage to buy a single-family house[1]. Fifteen years ago, it was still possible to buy a single-family house with 7.5 times of the annual gross wage (see green line in figure). The development of the affordability of flats[2], which is not figured here, shows an even more dynamic increase in PIR than the purchase of single-family houses.

Both forms of ownership have a noticeable increase in PIR in the past two years in common (see blue bars in figure). On the one hand, this is the result of the weak wage development, which was slowed down as a result of the Corona pandemic; on the other hand, the price of ownership has risen continuously despite the pandemic. The price development is due to the low interest rates, little alternative forms of investment as well as the lack of suitable living space as well as building land. The resulting pressure on demand is further increased by capacity bottlenecks in the construction industry. This puts additional pressure on property price development. In order to slow down the price dynamics and making housing prices more affordable, the future coalition is supporting cost-cutting measures such as modular and serial construction. The new government also wants to support households with lower incomes in financing. It remains to be seen whether they will achieve their declared goal of increasing the ownership rate in Germany (46.5 %). 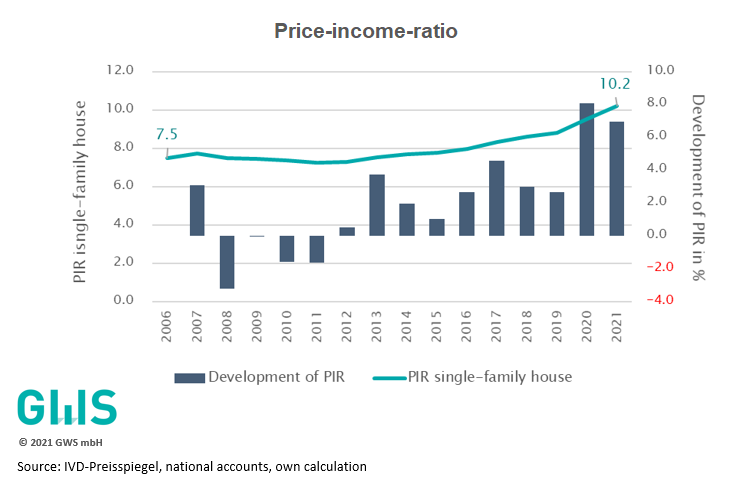 On behalf of the German Environment Agency (UBA) and the Federal Ministry of the Environment, Nature Conservation and Nuclear Safety (BMU), the Federal Institute for Vocational Education and…

Our figure of the month 01/2022: Electricity consumption – today, tomorrow and the contribution of hydrogen

Gross electricity consumption was 577 TWh in 2019 ([1]; the values for 2020 are not used in the following version due to the distortion caused by the Corona crisis). The old German government…

The e3.ge macro-econometric model for Georgia developed jointly by GWS and our partners in Georgia has been applied to quantify the economy-wide impacts of climate change adaptation. The…

Our figure of the month for New Year's Eve 2021: Price explosion in wholesale

Wholesale prices developed mainly in one direction this year – upwards. Almost all wholesale segments are affected, in particular other wholesale (+24.7% year-on-year January–November 2020),…

Our figure of the month for Christmas 2021: Let them eat goose

Christmas is often celebrated at a well-set table, with plenty of everything, rich of flavor and choice, lately occasionally vegetarian. However, traditional Christmas roasts rely on an…

Our figure of the month 12/2021: Buying property has become more expensive for the tenth year in a row

Wage increases cannot keep up with the increase of property prices, which means that affordability continues to decline. This is measured by the price-income ratio (PIR) and shows that in…

Energy Policy Brief for Kazakhstan published in the CRED project

The e3.kz macro-econometric model for Kazakhstan developed jointly by GWS and our partners in Kazakhstan has been applied to quantify the economy-wide impacts of climate change adaptation. The…

Anett Großmann presented the CRED project, methods, tools and results at the COP26 Side Event. Excel-based E3 (economy, energy, emissions) models were developed together with partners in…