The Corona pandemic had a significant impact on the consumption behavior of German households. Initially, households had to adjust their spending in line with freezes and hygiene regulations. As the pandemic progressed, supply shortages and price increases were added to the mix. The extent to which proportional consumer spending changed as a result of the pandemic is shown in the following figure. It shows the development of domestic private consumption since 1991 both in nominal terms, i.e., in current prices, and in real terms, i.e., in 2015 prices. Total domestic private consumption is shown on the right-hand axis, and proportional consumption expenditure on specific groups of goods and services is shown on the left-hand axis. 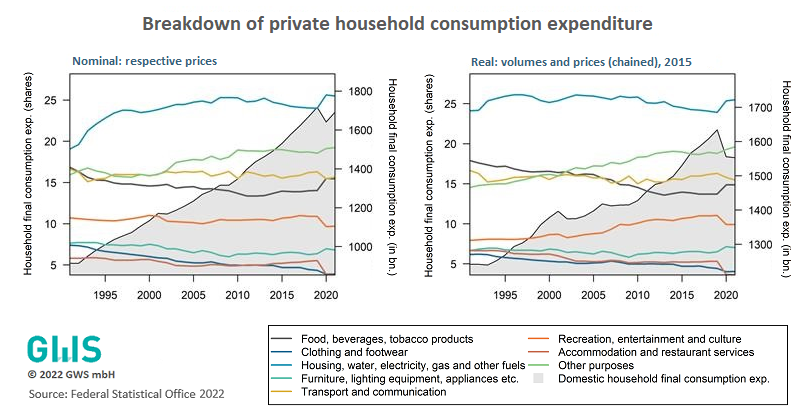 It is immediately apparent from the figure that the pandemic has led to jumps in pro-rata consumption expenditures that have never occurred in the past 30 years. However, the trend in pro-rata consumption expenditures before the pandemic is also interesting. Comparing nominal and real values provides information on the extent to which shifts in consumption are price-driven or whether consumption has actually changed in "real" terms as well. Here, spending on housing and energy immediately catches the eye. If prices for housing and energy had already been as high in the 1990s as they were in 2015, proportional spending on these goods would have been around 25% even then. For food, the price effect is exactly the opposite. These have become cheaper and cheaper over time, so the steadily declining share of spending on food is primarily price-driven.

Overall and in real terms, household consumption has changed quite substantially over the past 30 years. Although the change in consumption is a rather long-term process, it is clear that spending on leisure and culture, as well as on other purposes (which include, for example, spending on education and health), has risen steadily at the expense of spending on clothing and footwear and spending in the hospitality sector. A key factor in this shift is also that food has become increasingly affordable, leaving more money for entertainment.

Our figure of the month 04/2022: Private consumption over the last 30 years

The Corona pandemic had a significant impact on the consumption behavior of German households. Initially, households had to adjust their spending in line with freezes and hygiene regulations.…

GWS at the EU conference on modelling for policy support: recordings and presentations now available

GWS has contributed to two sessions of the 2021 EU Conference on modelling for policy support, which took place online from 22 to 26 November and was organised by the European Commission's…

Our figure of the month 03/2022: German-Russian Import Dependence

The EU's four sanctions packages against Russia were adopted quickly and in great unity. In the meantime, sanctioned Russian banks have also been partially…

We are looking for student employees (m/f/d)!

Our figure of the month 02/2022: The bicycle boom is catching on with commuters – 10% have taken up cycling or e-bikes since the pandemic

In Germany, millions of working people commute between home and work every day. Despite the past two Covid years, the trend toward commuting is…