The LÄNDER model is a forecasting model which can be used to analyse the effects of structural changes at the level of the 16 German federal states. It directly interfaces with INFORGE, which models the German economy as a whole, and leverages value added and employment figures for individual industrial sectors calculated by INFORGE at the state level. The LÄNDER model can be used to analyse and simulate a range of scenarios at the federal state level. Depending on the analysis required, additional specific features of individual federal states can be taken into account, just as disaggregated sectoral information.

The model also explores the effects of regional differences in population projections on the economic cycle within the federal states. This process allows to picture regional interrelationships within the macroeconomic context. The current version of the LÄNDER model calculates forecasts and scenarios through to 2030.

The core data is taken from the federal state accounts, which provide indicators including time series for wages, gross value added and employment for up to 20 industrial sectors.

This is supplemented by German Federal Employment Agency data on the detailed structure of employment, including demographic and socioeconomic time series. The demographic projections of the Federal Statistical Office are also implemented. 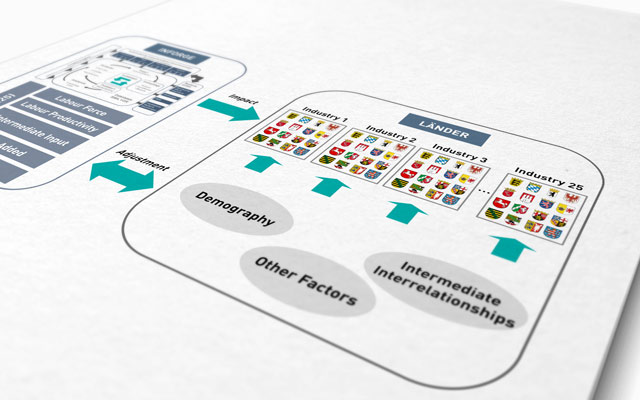